In all turf projects that are undertaken the single most important thing is to have a nice solid base to lay the turf on. In this article I will explain to you how best to prepare and compact a suitable gravel base for a general landscaping Synthetic Turf install.

The most important thing to do when preparing to lay a gravel base is to ensure that the excavation is done to the correct levels. The recommended depth for a base is between 75mm and 100mm thick. The best way to measure the depth is by using a measuring tape along the edges and then using a straight edge or string line to measure down in the middle areas of the excavated area. It is also very important to ensure that when you do get down to the correct height that the material on the ground is nicely levelled and kept intact so that there is less chance of the material below contaminating the gravel base.

The gravel base will need to be compacted in 50mm lifts. I recommend strongly that a base gravel (base b) should be used for the sub base and then compacted with a vibrating plate with water. You may need to build this material up to within 30-40mm of finished height to allow for a top coat of a finer material. In any base the rate of compaction should be 95%. To get to this point the average gravel base area will be vibrated 3-4 times.

A very important tool that I recommend using is a hand stomper, this is used for areas that are impossible to get to with a vibrating plate. I use a tool that weighs 25kg and is cut into a triangle on one end and a square piece on the other end. 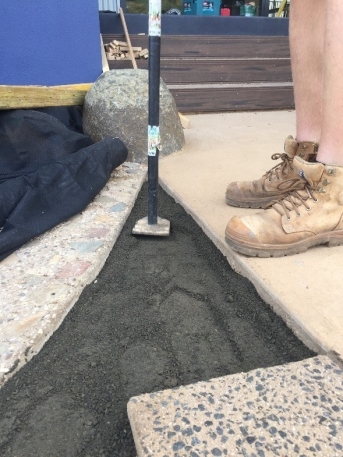 The next layer of material to be placed on the base will be a finer/cleaner product which is called crusher dust. This material is designed to be used for the final layer of compacting as it will stop any of the bonier pieces of base gravel from coming up and causing any potential lumps in the base. I would recommend spreading a layer of the dust (about 15-20mm) and then watering and vibrating. Then one final layer which can be used to make all levels good. Using a trowel for the edges and a hand smudge for the middle parts of the base. For a standard 35mm landscaping product I recommend a depth of 10-15mm below the finished heights, this allows for the turf backing to be hidden and less likely to be lifted up as well as when the turf is infilled with kiln dried sand the heights should be very close to flush with the edges that you are working to which will them limit the chances of any trip hazards.

The final step of laying a compacted gravel base is to roll the base with a hand roller, this should weigh between 50-100kg. Water is required to pack down the final layer of the base whilst the roller is being pushed and pulled over the entire base. This helps reducing the chance of the roll of turf making scuff marks in the base when positioning heavy rolls of turf. If it is possible to leave the base for 12-24 hours, that is the ideal amount of time for the base to firm up prior to laying the synthetic turf.