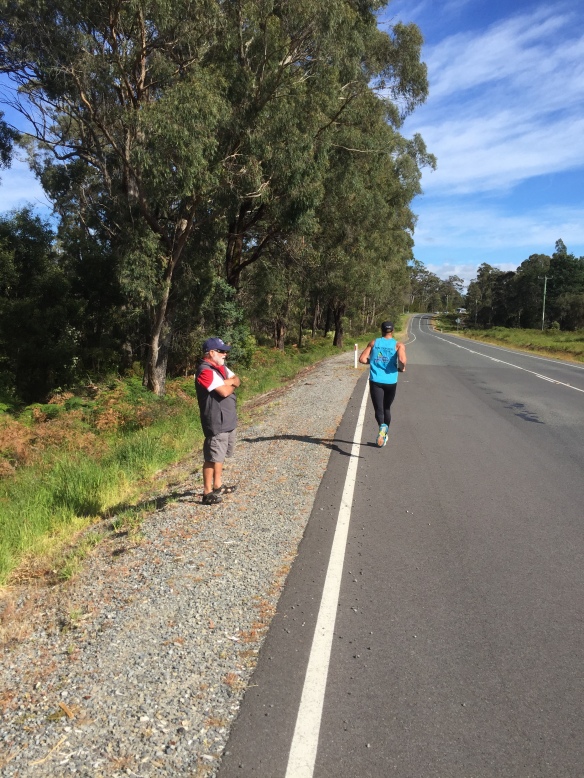 I am Jade Child, 31 years old and I live in Launceston Tasmania. I have a little daughter called Zara send she turned 4 in early November. I am a landscape gardener and I have been working in the industry for around 13 years. I started a business about 7 years ago which is called Tassie Artificial Turf which supply’s and installs artificial turf around the state of Tasmania.
I decided that I would do some work for the Dads in Distress charity which supports men who are dealing with all of the issues around the break ups in relationships which can affect mental health. The stats show that 3 men every day commit to suicide over issues related to separation whether it be children matters or financial issues just to name a few. This statistic is bloody awful and I hope by raising some money and hopefully lots of awareness some lives can be saved and some more common sense can be shown by different parties and people about doing what is right in the situation people are in.

I gave myself 3 challenges.
Running the Point To Pinnacle
Running from Scottsdale to Bridport
Growing a moustache for the month of November.

Point to Pinnacle.
This run is 21.4km long, from the Wrest Point Casino to the top of Mouth Wellington which is a climb of about 1200m.
Unfortunately the weather was quite horrible and the organisers were forced to change the course so that no one was injured during the race with the extreme weather conditions. Anyhow the course was changed to an out and back to, so 10.7km up the mountain and 10.7km back down the mountain with a finish at the Casino.
The weather was pretty miserable so the decision was the right one to change the course.
I push hard up the mountain and got up in about 51 minutes. I then put the ear phones in and the foot down and did the second half of the race in about 39 minutes which was really quick. I finished in 46th place.
Scottsdale to Bridport
I challenged myself to running 21.5km from Scottsdale to Bridport as I had travelled the roads thousands of times whilst growing up in Bridport and going to high school in Scottsdale. I knew the road quite well so I had a good idea about what I was in for.
I left Launceston at about 7am with my dad and my good mate Adam who was riding his push bike with me to support me. Dad was driving my ute and was in charge of checking up on us every 5km.
We departed Lords Hotel at 830am. I was doing 4.00 minute kms quite consistently until the large hills pulled me back to about 4.30 minute kms. Body felt good so I kept going strong. Adam fed me water every few kms and some Powerade and energy gels at about the half way point. The weather was warm and we ran into a slight headwind with about 5km to go. But of course we pushed through it and made it to Bridport in 1 hour and 28 minutes which was awesome as I had planned to be there in about 1.5 hours.
This was a pretty cool achievement as it is something I had always wanted to do. I had my family and friends waiting for me at the Bridport hotel which was awesome. We went out for some breakfast afterwards and then a lovely few hours at the beach with my daughter Zara learning how to surf. I thank my family members who helped out with that logistics side of things and my great mate Adam for assisting me by riding next to me the whole way, your a champion. We received a few donations along the way which was also great.
The last challenge for the month was to grow a moustache. This was a bit of fun and
I can confirm that myself and my partner Sarah were truly sick of the whiskers. But the facial hair was groomed into a seedy moustache which lasted one day before it was cut back to nothing with my razor on the first of December.

At the time of writing this I have raised just under a thousand dollars with some people close to me agreeing to donate some money shortly so it should push to be over $1000.00 which is just awesome. I also have to thank the North Easter Advertiser and the Examiner for writing some articles about what I was doing.

Also just to give you an idea on my efforts in this I only decided to actually do all this charity work at the start of November so this was a big effort to get it all off the ground and get it all happening.

Don’t get consumed up by other peoples words or attempts at causing pain.

Set goals and achieve them.

Challenge yourself in all aspect of life.

Who says you can’t you do